Many kinds of food could be tried even if you stay in Sham Shui Po for only a few hours. The pace of food serving is very fast, just like what most busy Hong Kong people would pursue of ---- the “fast food” culture, which suits the lifestyle of Hong Kong people, especially in the urban areas.

Shuttling across the streets, we have tried various kinds of well-known food in the district. Stepped into a crowded cafe and squeezed to sit down in a corner, we were looking forward to the signature dish in Wai Kee Noodle Café, the Noodles with Pig Livers and Beef. The matching of pig livers and beef with the soup tasted good, which made the instant noodles unordinary. What surprised me was the addition of ginger into the noodles. I don’t like ginger but it’s really a great ingredient to remove the fishy taste of the livers in soup. 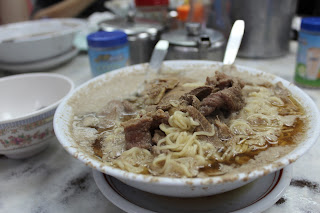 I have heard that there is a worth-trying sandwich nearby, but I did not expect too much on it, because I thought “sandwich is sandwich”. Until it was placed on our table, I was amazed by the thick layer of fillings in between the two pieces of toast. Juicy scrambled eggs embedded with chopped beef, not the minced one, the sandwich was freshly made and I did enjoyed eating it. Yes, that is the Eggs and Beef Sandwich found in Sun Hang Yuen Kin Kee! You must try it at least once. 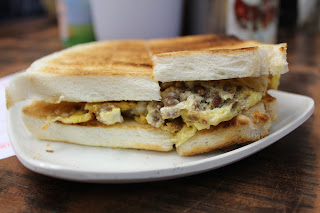 After having such heavy meals, we would like to try some light refreshments. We bought a dish of rice rolls in Hup Yik Tai. It was so new to me that we have to enjoy the dish standing in the back lane. I thought it was an ordinary dish as we could eat rice rolls elsewhere easily. However, after I ate the first piece of it, I realized it was different. It was very smooth, with strong rice fragrance and was found that the peanut source blended with oil, no wonder the taste was special. 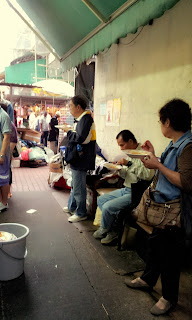 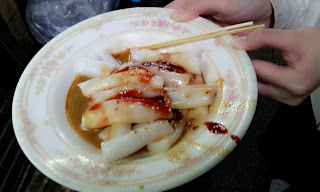 Along the way, we have searched for much other classic and authentic food in the district, such as Kwan Kee’s cakes and puddings, Kung Woo’s bean curd and Lau Sum Kee’s Shrimp Roe Noodles. How they taste? Why they are so famous? Go to Sham Shui Po and find it out!

Exploring Sham Shui Po
Hong Kong
We are students from City University of Hong Kong and we would like to introduce the food in Sham Shui Po and explore the underlying stories.